The now Husband & Wife couple Simon & Rebecca Owen make up the incredible electronic/synthpop/EBM sound of Future Perfect. They formed in 2009 taking their influences from the lyrical darkness of Joy Division & Depeche Mode, the experimentalism of early O.M.D and style and groove of Pet Shop Boys. Future Perfect have a sound that’s looking forwards and never backwards. In 2010 they released their debut CD, 'Dirty Little Secrets' to great acclaim. Their follow-up, "Escape" expanded greatly on their sound to great effect, the single release and remixes of "Paradise" finding it's way onto dancefloors worldwide. 2014 saw Future Perfect take to the stage at The Silicon Dreams Festival in Liverpool along with other bands Northern Kind,Tenek and Vile Electrodes. Signed to Conzoom Records, they are label-mates with Parralox, Zynic, Sinestar and Daybehavior amongst others. 2015, with an additional member in Noel Canney, Future Perfect presented an outstanding album 'After The Fall'. In 2015, 2016 and 2017 Simon and Rebecca continued playing numerous gigs throughout the UK to expand their audience, including another amazing performance at Silicon Dreams Festival 2017 on 8th July 2017 joined by Avec Sans and Parralox amongst others. These gigs culminated on 2nd December 2017, where Future Perfect played a fantastic set much critically acclaimed at the Electric Dreams Weekend, with four new tracks premiering from their forthcoming album, Touch. The Electric Dreams Weekend saw Future Perfect play at Butlins Bognor alongside The Human League, Avec Sans and many other great bands. The storming set was filmed with multiple cameras and is set to be shown on Vintage TV on April 3rd 2018. Simon and Rebecca are busy writing and recording for their new album, titled "Touch", planned for release later in 2018 - and so far four superb melodic anthemic tracks have been recorded; Rip, Touch, Assassin's Eyes and Victoria.
Website | Facebook 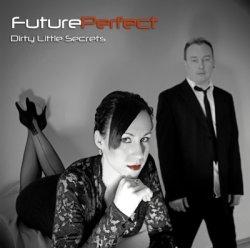