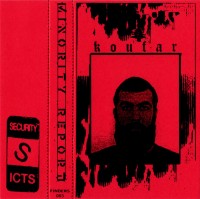 Tracklist
A1 Sand Nigger
A2 Minority Report
A3 September 11th, 2000
B1 What Are You Looking At White Boy
B2 Unknown To This World
B3 I Am Bachir

Thanks to Sam Torres for all of the spiritual guidance necessary to bring this release to life.

Dedicated to the fam who refused to change their names."

Koufar - When the last one leaves