Evidently influenced by classic Dark Ambient/Industrial artists like Lustmord, Ah-Cama Sotz and the like, Mortaja worked for years as a living room only project. When Bert - the head of this one-man project - decided to give a demo to audiophob, we were surprised by the quality of his productions and the fact that he has never released anything so far. Bert quickly became member of the audiophob family and has demonstrated his musical abilities on several releases as well as live performances. His highlights so far were live appearances at the Maschinenfest and Schlagstrom festivals.
Facebook 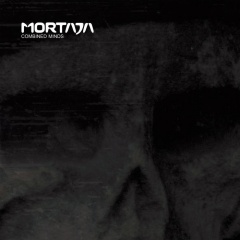 Mortaja - Combined Minds (2018)
Quote
The third CD release of Mortaja called “Combined Minds” is a proof of the steady evolution of Bert Lehmanns musical work. Leaving the more calmer side of its output to his “Torn From Beyond” moniker, Mortaja now is able to be as powerful on CD as during the last live appearances of the project. Danceable electronic sequences, highly influenced by EBM as well as Techno, shape the overall atmosphere of the album. The sound of Mortaja can now be found in a world between Monolith and Thomas P. Heckmann, leaving enough room to stand for its own. Mortaja invited friends to provide new interpretations of its songs: Greyhound (Hands Productions) provided a version of “Haunted”, while Suki offers his rework of “Serpent’s Kiss”, a track, whose original version can be found on Mortajas last album “Bone Chamber”. (auphcd027)
Label: Audiophob
Format: Album, CD
Country: Germany
Style: EBM, Techno-Industrial, Electro-Industrial