Quote
Shadow Image is a rock band created by singer and songwriter Harley Mace of South East Michigan. Resurrecting gloomy tunes from the grave, Shadow Image's music had been called "funeral rock", groovy darkness and compared as somewhere between the Sisters of Mercy meets Christian Death. While hard to categorize, the band combines influences ranging from goth, deathrock, post-punk, heavy metal and classical piano into a beautiful, dark theatrical experience. Meanwhile their over the top looks carry a modern edge with DIY style that is all their own.
*
Signed to the legendary German label, Danse Macabre Records in 2013 brought the release of their first full length album, Kiss the Ashes. Shadow Image has since been featured worldwide in magazines such as Zillo and Sonic Seducer and gained the interest of thousands of fans around the globe. Along with their earlier released eponymous EP in 2012, which quickly caught the underground scene's attention, the band has created a modern sound also reminiscent of early 90s goth rock.
Website | Bandcamp | Facebook 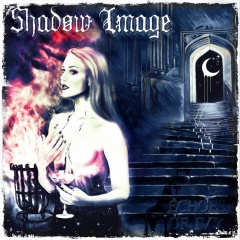